If you are looking for a top-quality spinning reel, then we’ve something that may interest you. But beware: you’ll need to be ready to pay the price for it.

Today, we are going to review the Daiwa Saltiga Dogfight SATG7000HDF spinning reel. An exceptionally highly reviewed fishing reel, this model has caught the eye of many enthusiast anglers.

But what exactly makes this fishing reel so great? Well, if that’s the question you have, then we think we have the answer for you.

As you’d expect from a spinning reel of such level, Dogfight 7000HDF is beautifully built. And it’s not only the fact that this thing is made from tough composite materials and aluminum. It is the fact that it is assembled very tightly, and there is no play in any component, be it moving or not.

Being so well-built, Dogfight 7000HDF is at the same time very lightweight. It weighs just under 30 ounces, with the carbon used in its rotor probably playing some role in its weight reduction.

Durability and quality sure are important in spinning reels, but performance and reliability are no less important. Once again, Dogfight does deliver on those as well.

First off, let’s talk about its smoothness. Dogfight 7000HDF is one of the smoothest reels out there. There probably are smoother reels out there, but it is more than enough smooth to allow you not to worry about it at all.

If you watch some videos, you’d understand what we mean. The mechanism is so smooth that the spool rotates merely under the weight of the handle. And there is no noise whatsoever coming from the mechanism. The 15-bearing system sure does its job perfectly.

Dogfight 7000HDF is no less remarkable when it comes to reliability. Daiwa employed its proprietary Magsealed sealing technology. Using magnetic oil, this system is capable of keeping elements – primarily water – away from the components of the reel. This solution is definitely a thing that you won’t see in other reels.

At the same time, there is one downside to the use of such a unique system. It will most likely be rather difficult for you to do maintenance on this reel. The average store probably won’t be able to help you, so you’d need to address Daiwa. And it may take plenty of time until they get your reel, fix it, and then send it back.

Dogfight 7000HDF is the kind of a spinning reel you’d want to go to catch large fish. There are plenty of factors that allow this.

The 66-pound drag is probably the main among them. Thanks to this, catching big fish shouldn’t be a difficult task for you. Given that you got the right line and rod, of course.

The second important feature is the 5.7:1 gear ratio. The gear ratio makes Dogfight 7000HDF a pretty slow-spinning reel, though it definitely isn’t the slowest out there. And since slower gear ratios allow better power transfer along the line, the 5.7:1 ratio is another thing contributing to the heavy-fish performance of this reel.

The last crucial feature in regard to heavy fish catching is line capacity. This fishing reel takes 80/550 (lb./yards) braid line, so you should be able to catch most of the fish you’ll encounter.

The handling is also noteworthy in this spinning reel. And it is not only because the action is so smooth but also because Daiwa equipped this reel with a large aluminum handle that is very easy to hold onto.

Now, the choice of aluminum may sound a bit weird for you. it isn’t that comfortable to hold as rubber, right? Well, we think that you should use such reels in gloves anyway: the grip of your skin will likely be insufficient to efficiently hold the handle while battling large fish.

And the handle could also be easily switched from the right side to the left and vice versa!

The shape of the handle may be less convenient compared to that of Shimano Stella SWB, for example, which is another high-end reel. Stella has an elongated handle, which we think is more comfortable. Nonetheless, the handle of Dogfight 7000HDF is a very convenient one as it is.

1. What kind of a fishing rod would you need to use with this reel?

We’d recommend you to use a high-end fishing rod with this thing. No matter how sturdy this reel is, an inappropriate rod will limit you significantly. An inexpensive rod would most likely break down long before you could uncover the potential of the reel, making its purchase just pointless.

Besides, make sure that the rod has the same line capacity rating as this reel. Aim at 80/550.

2. Is this reel suitable for saltwater?

Yes, Daiwa Dogfight 7000HDF has been designed with saltwater fishing in mind. One of the purposes of the magnetic coil system is to keep saltwater away from the components.

However, make sure to wipe this reel clean after saltwater fishing. It is a great reel, but even it won’t live long if you don’t take care of it. 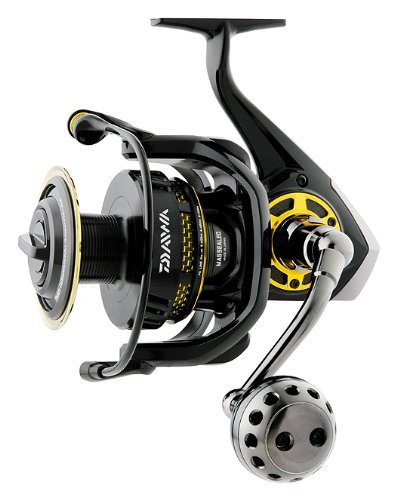 A truly outstanding fishing reel, Dogfight 7000HDF isn’t a reel for everyone. Not every angler needs the smoothness or the heavy-fish performance it delivers. Some people catch small fish much more frequently, and this fishing reel would be overkill for them. There are plenty of other, cheaper fishing reels that do the job with small fish better.

And besides, not everyone can afford such a fishing reel, even if they really need it.

However, if Dogfight 7000HDF is well within your financial capacity, then it most likely won’t disappoint you. But before getting this fishing reel, make sure that you have enough budget to also get a fishing rod that is worthy of this reel! 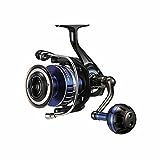 This page may contain affiliate links. If you click on them and make a purchase, we’ll earn a small commission, at no additional cost to you.